Just back from a budget 4 night break to Spain.  We stayed at Melia Benidorm (collecting loyalty points) and flew with Easyjet.  This is the view from our floor into reception - all the 'gardens' are of rooted, living plants on each floor and are maintained by a daily gardener.  Our hotel is on the 'New Town' side which is full of lively bars and sky scraper hotels and where the original 'Benidorm' TV series was filmed (we visited Neptunes bar and The Palladium on our first night). 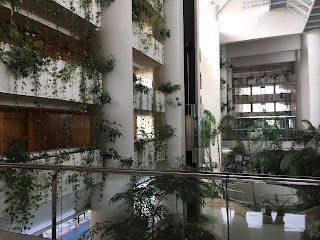 Our sons joined us and enjoyed the night life in the 'New Town' area, but we all preferred to spend time in the much prettier 'Old Town' which is full of little tapas bars and narrow, winding streets with rickety houses. 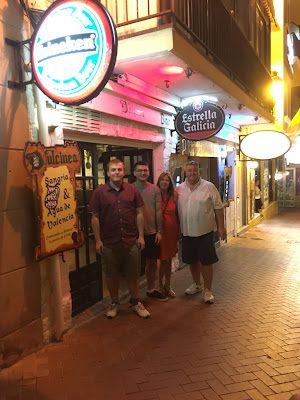 The weather wasn't great, there was torrential rain/lightening on arrival at Alicante and that evening we learned that Spain was experiencing the worst weather since 1978 with floods in Alicante and nearby areas although Benidorm itself was fine.  The Government issued a red alert so all the hotels that had trees were forced to close the pool and grounds due to potential storm damage, ours was therefore restricted for the best part of our stay and also the beach was red flagged so no swimming - the sea was very rough.  On our last day, Sunday, the red alert ended and we had sunshine all day and were allowed out to the poolside. 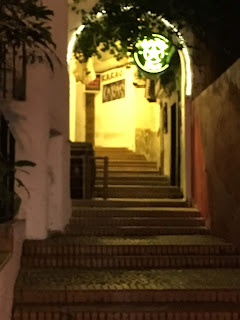 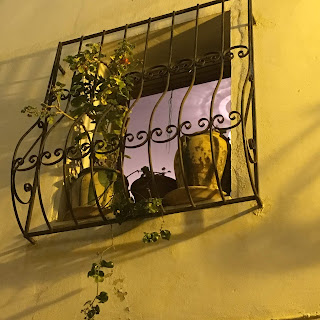 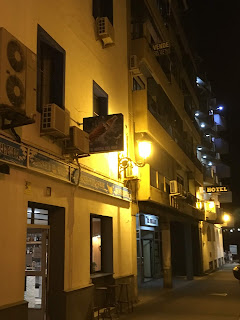 Below was a very pretty house with garden next to the famous Carrero del Gats
(alley of cats) I have tried but unable to find why it is called this! we only saw 2 cats here and they weren't telling.  It's right next to a lovely Dutch bar and seems to be famous not for cats but for giving a view of both beaches (Lavente and Poniente) if you stand in the middle of the alley and look left then right. 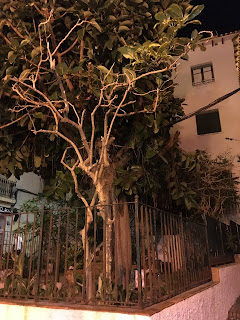 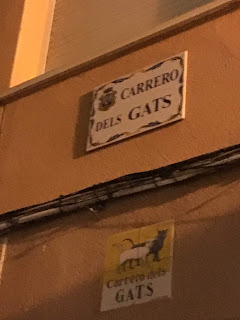 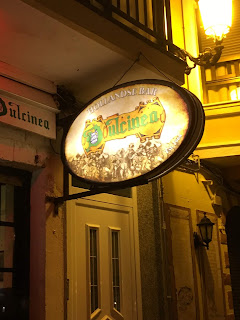 If you can't see the video below of the firework fiesta, I have uploaded one on Youtube here
(you will need to copy and paste the link below) 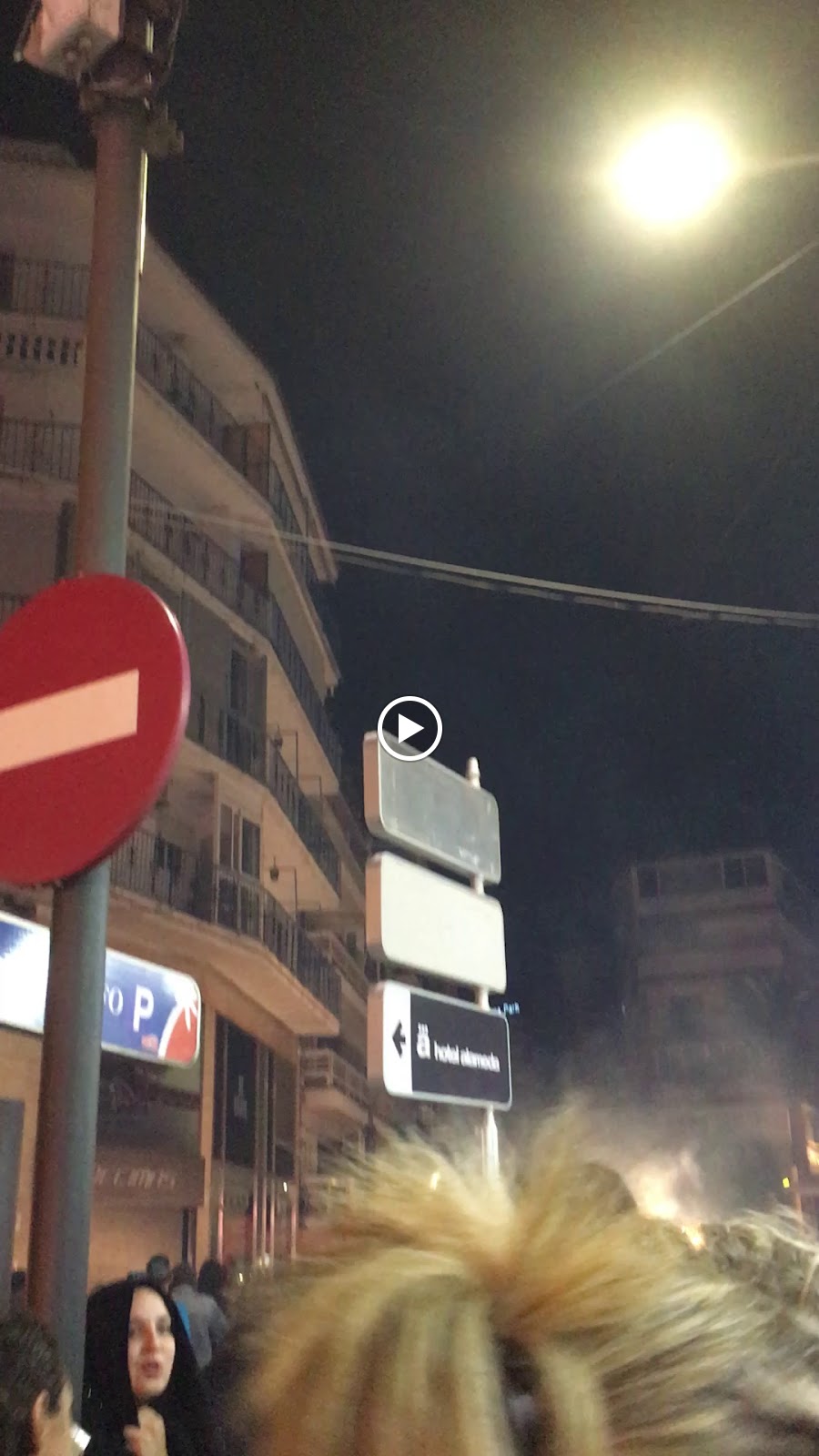 We were lucky to be in the right place at the right time to see a local fiesta of fireworks, it hadn't been advertised (the main Fiesta in Benidorm is not until November).  This started at 2am when tourists were scarse and appeared to be for locals only, police were present and also  Red Cross but it was peaceful, although you wouldn't get this close to fire in the UK.  People strap homemade metal contraptions to their backs and tape the fireworks on so that when lit they are like human catherine wheels with sparks flying out everywhere, there is much running and jumping in and out of fire along the route.  The procession went on for over an hour with pipers playing all the way round winding streets and ending in a spectacular display at the Centre of Old Town.  We joined the procession through the town, it was very smoky which is why some people had covered their heads/faces - I went to bed with my hair smelling of smoke and my arms smarting from stray sparks! 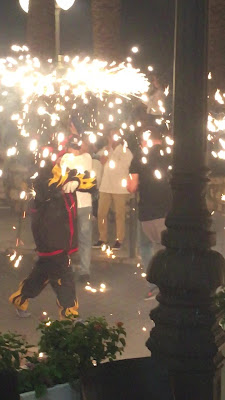 The reason for the fiesta was hard to fathom, the locals said it was 'Drunk Fire'  rooted in history of  the battles between the Moors and Christians, which took place over control of Spain in the 13th to 15th century. 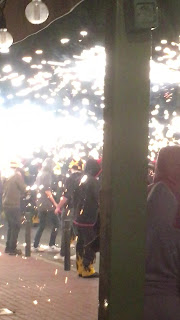 We came to Benidorm in 1982 for our honeymoon, my inlaws came too (and also my 'boss' from work and his family!).  My in-laws were regular visitors over the years and liked this bar (Tony Moran's Bar Rumbo) in the Old Town - so of course we had to put in a visit once again - and here we are - 37 years later with our boys visiting for the first time to carry on the tradition, we got a very warm welcome as the original owners son still runs the bar! 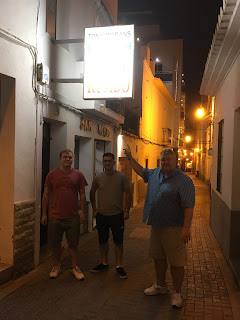 These kind of bars are plentiful in the narrow streets of this area and known as Tapas bars as they offer traditional Spanish snacks like spicy meatballs, olives and crusty bread. 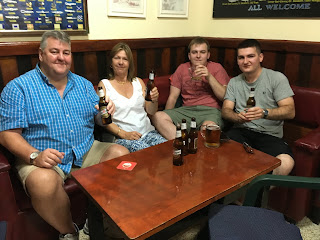 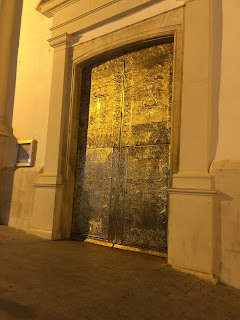 This spectacular door is to the church of San Jaime and Santa Ana and is the oldest church in Benidorm, 18th Century.  Inside lies theVirgen del Sufragio, so called due to her intact discovery among the ashes of a ship in the year 1740.  In November the church door is surrounded by a halo of flowers. 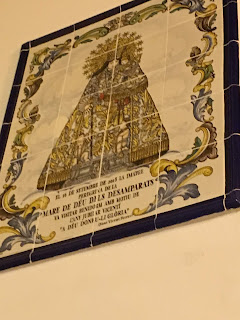 So, a lack of pics of the beach due to the unexpected weather! but we still had a good time.  Here's the view from the Old Town looking across the beach to the New Town. 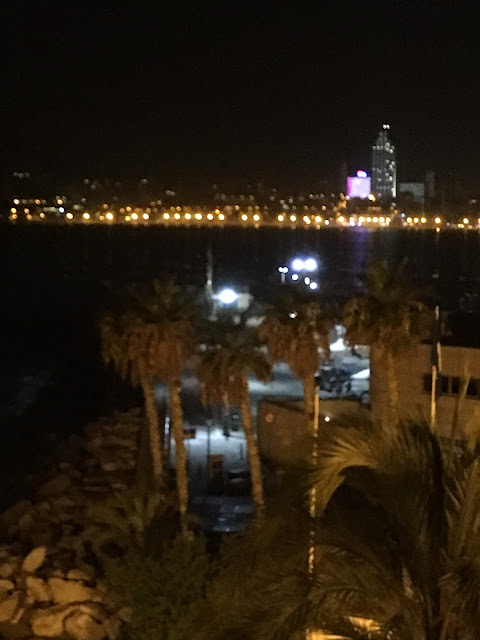 p.s.  I decided to keep my other blog Betty-thewoodfairy going after all for all things mostly un travel related :)

It takes a long time to become young:  Pablo Picasso


We visited Cape Verde for a week in February 2019 to celebrate my 60th birthday. Travelling from the UK it is a short. direct flight, guaranteed sunshine and complete relaxation, a treat from hubby to feel totally pampered on my birthday we stayed a week, which is enough, if you have itchy feet like me! 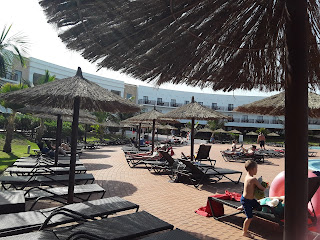 Cape Verde is in the Atlantic Ocean, off the Western Coast of Africa close to Senegal and Gambia and approximately a 6 hour flight from the UK.   It's  amongst an archipelego of islands forming the crossroads to Europe and belonging to the Macaronesia Region. 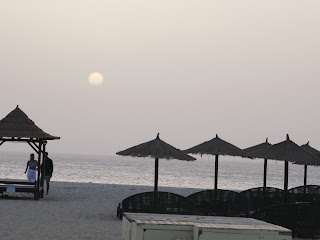 When we visited, it was the beginning of the International wind surfing championships, but you would never have known (no promotional leaflets/info from the hotel) many professional surfers were there for the  GKA Championships.  The sea was, literally, ferocious, some parts of the beach were out of bounds to tourists with waves as high as houses.  We were disappointed that we were not able to swim in the sea at all (although at the public beach down town the locals were fearlessly doing so).  Nonetheless, the championships took place further into town and many coloured surfboards could be seen daily from our location as the championships went ahead.  Infact, on a visit into town, it became apparent that the locals from age 6 are more than capable of handling the waves and the public beaches were full of youngsters practicing their moves on surf boards - they could definitely promote Cape Verde as a destination for extreme sports!!!

We stayed in Sal, where there is very little vegetation and considerable poverty outside the hotels.  Food is imported, mainly for the tourist palate.  Our hotel would get a container shipped in fortnightly and the contents would be mostly unknown, so the chefs had to devise a menu around what came in.  Outside the hotel they grow little more than a few vegetables over 11% of the land for their own domestic comsumption (corn/casava).  The island is volcanic and barren.  We had plenty to eat being rich tourists, but it weighed heavily on my conscience, as there is a stark contrast between the reality outside and the luxury of tourism within our hotel, it's very tangible.

That said we had a wonderful holiday on sandy beaches in an all inclusive environment, cared for by staff who were attentive, all of which we signed up for on this trip.  This was not much of an adventure, just total relaxation.

Betty
I'm a wife, mother of 2 young men. Like painting, woodland walks, travel, pets and people - oh also am deaf as a post.

I share sweets, pets and sunbeds, but not my blog posts/pictures! So please don't copy - that's what keeps us all unique folks!